What can CVD Equipment Corporation do for the High Power Electronics Industry?

Physical Vapor Transport (PVT) systems are used to grow various crystals such as silicon carbide and aluminum nitride (AlN) which are subsequently processed into wafers to support high-power electronics applications. The demand for silicon carbide bulk crystals (boules) and epi-ready wafers continues to accelerate for electric vehicles, energy, and industrial applications. Today, the silicon carbide device market accounts for 2 Billion USD, and market forecasts show no signs of slowing down, growing at a CAGR of up to 35% through 2026 (reported in Needham Industry Update Oct 6, 2022).

opens in a new window Get More Info

Hydride Vapor Phase Epitaxy (HVPE) Systems are used to grow polycrystalline bulk gallium nitride (GaN) as the precursor for monocrystalline gallium nitride wafer production. Our HVPE systems are also used to grow thick epitaxial single crystal layers of doped and undoped gallium nitride, Aluminum Nitride (AlN), Gallium Arsenide (GaAs), Indium Phosphide (InP), and other binary and ternary systems where a metal halide is reacted with one or several hydrides to form a solid crystal. CVDE understands the needs of our customer base and prides itself on the wide array of system features and options we can offer; this sets us apart from other OEMs. We’ve artfully engineered so you can deliver better results. 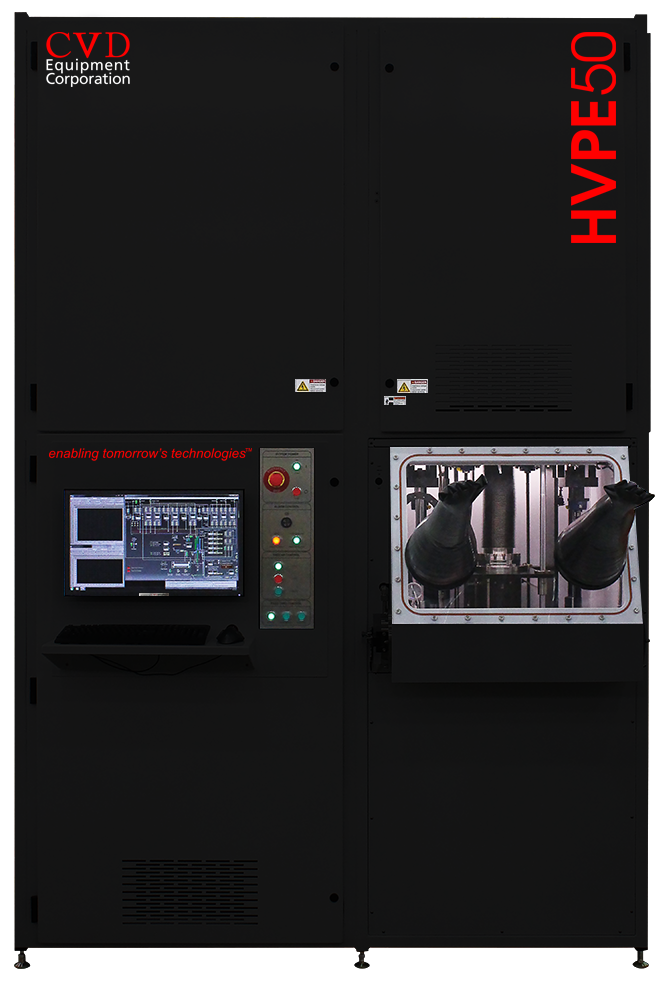 What differentiates CVD Equipment Corporation from the competition?

Our commitment to provide industries with the safest and most reliable Physical Vapor Transport (PVT), and Hydride Vapor Phase Epitaxy (HVPE) systems through modular design concepts of panels, controls architecture, and cabinet enclosures.

Our drive to provide our customers with a means to profitable revenue streams.

CVD Equipment has refined the physical vapor transport process beginning with the crystal growth to ensure high volume production. We pride ourselves on our skillfully engineered systems crafted to ensure pristine crystal growth process that yields the highest quality boule on the market today. This is achieved through robust thermal controls that maintain temperatures within half a degree, multi pyrometers for real-time digital monitoring of crystal growth with the ease of a remote-control box for pyrometer positioning and alignment.

Our dedication to customer satisfaction has brought CVDE to the forefront as a leader in global equipment installations, distribution, and support around the globe.